Skip to content
It’s been a tricky year for getting together for board games, serious or otherwise, so I thought I’d share some tricks.

There are several board and card games which have free online versions, for example:

Alternatively, there are Tabletop Simulator (paid) and Tabletopia (free), which are “tabletop game simulation engines” which can run any game you build, with virtual dice, boards, counters and even flipping the table in rage (Tabletop Simulator). You can build any game you can think of in there, and also download games built by others.

An easier way to play is Miro or Google Jamboards. These are effectively virtual whiteboards where you can create elements (images, notes, shapes etc) which others can move around and play with. You can also draw. I find these invaluable for teaching with games – though there’s no built-in dice or shuffling, so you need to have honest players! 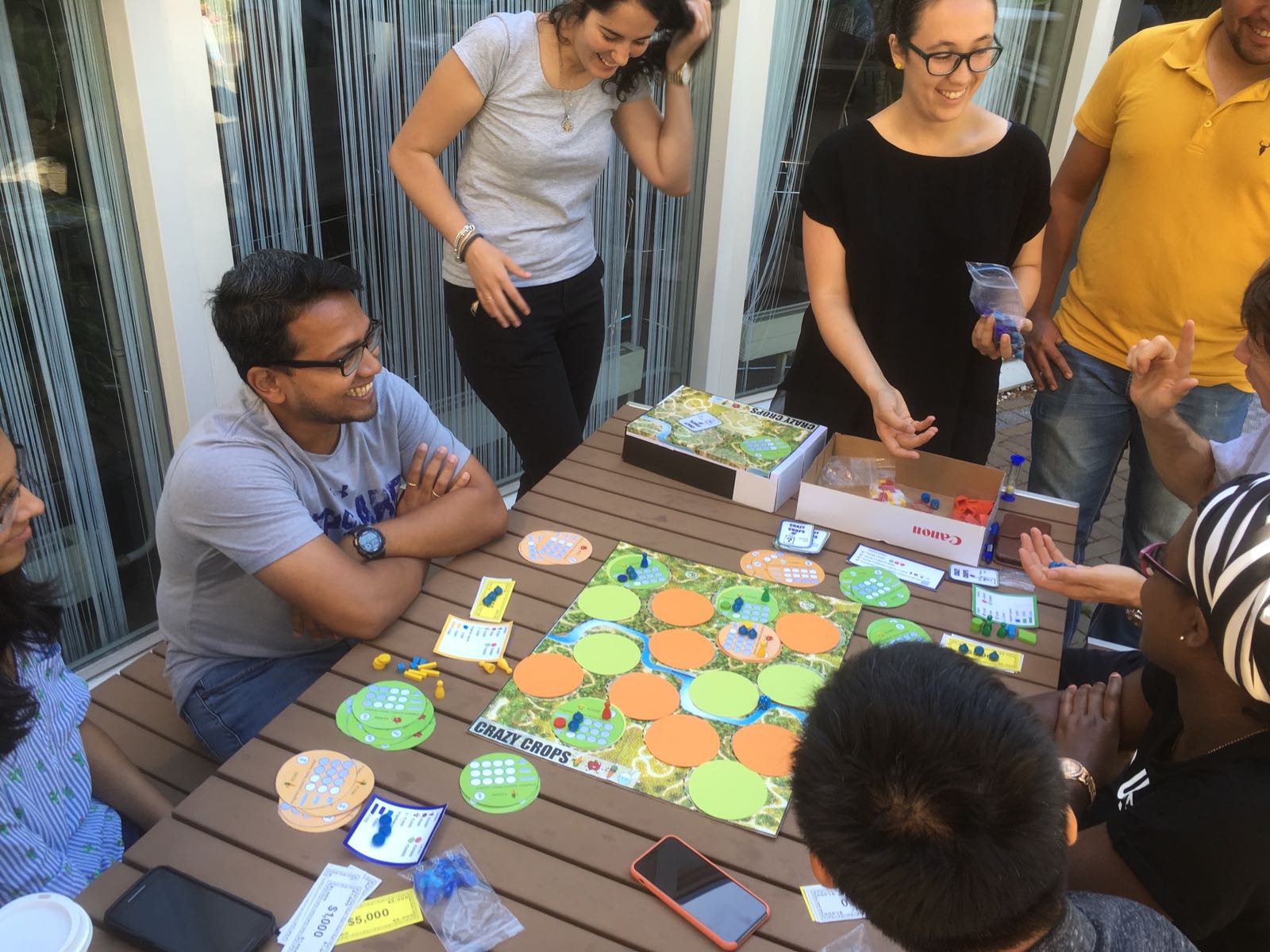 I’ve recently come back from IHE-Delft where I was teaching on the third edition of the “Serious Gaming for the Water Sector” summer course. I’m very lucky to be able to spend a week a year having fun with bright, creative people and piles of game bits and pieces and call it “work”!

The course has changed quite a bit since I organised the first edition in 2016. It’s a week-long course aimed at all IHE-Delft postgraduate students, and looks at how to use games to solve water-sector problems – and how to design your own.

The first year (2016), I was quite new to teaching and had a mortal fear of ending up in front of a class with nothing to say. Every hour was planned. Workshops, guest lectures, lectures by me – you name it, it was in the schedule, and had been meticulously prepared with slides and worksheets and cards and activities and and and…

This first edition did go well and I got really positive feedback. However, some participants commented that they’d like to have had more time to work on designing their own games. I took that on board and the second year, I stripped out some planned activities and devoted more time to the “Game Design Challenge” – the game design activity that took up most of the week. However, I got the same feedback again – the participants wanted more time to work on their own.

So, this year I took the plunge and devoted the whole week (bar an introduction and a short theory workshop on the Monday) to the Game Design Challenge, with other small bits of content brought in informally as the game design progressed. I wondered if the lack of theory would hamper the students, or if they’d feel they’d been “thrown in at the deep end”. Well – no! The games from this year were some of the best I’ve seen, and the reflections on game design in general given during the final presentations were also more developed than I’d seen before.

It’s made me realise that most of the content that might be given in a lecture will come up organically during the process anyway, and that when students come up against it on a real project it’s more likely to stick. And I think I might’ve got over my nothing-to-say phobia.

You can read more about the course here.

If you’re thinking about teaching your own serious game design course, I really recommend the Triadic Game Design workshop, the Systems Thinking Playbook (or the Climate Change Systems Thinking Playbook (pdf)), and Spielmaterial.de for building up your game materials collection (no sponsorship, I just really like the site)! Also feel free to contact me if you’d like any pointers.