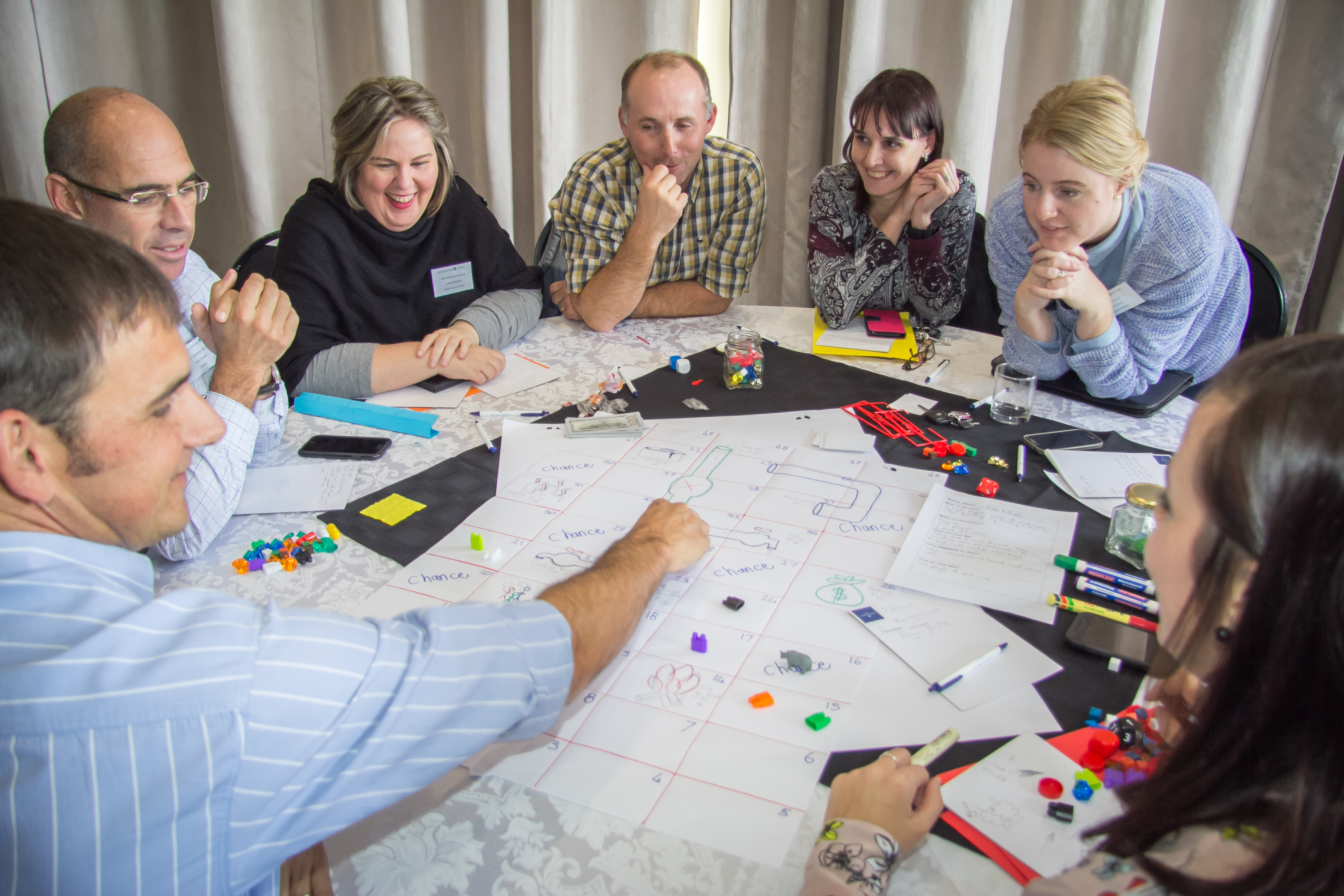 If your industry was a game, what would it look like? We asked over 100 people from the South African fruit industry this question and gave them two hours and heaps of game components to answer it. By getting industry experts to express themselves through game design, we were able to open up lots of underlying assumptions about the sector that usually go unvoiced. Idea inspired by conversations with Bruce Lankford.

As part of a project looking at the resilience of the UK fresh fruit and vegetable supply, we invited over 100 players in the South African fruit sector (a major exporter to the UK) to workshops where we explored how they see resilience. And this time, we decided to cut out the middleman. Instead of learning from the participants and then going away and making a game ourselves, we gave them a heap of game components and asked them: “If the South African fruit industry was a game, what would it look like?”.

We started with a few exercises with dice and cards to warm up, and then the participants had two hours in groups of 4-8 to design their games. It was amazing to see the fundamental questions that come up in such a fun exercise: what does “winning” look like? Should all players start from a fair starting point? What risks will players be exposed to? How can we fit this plastic rhino into the game?

Once the games were designed many of them led to rich discussions. I was surprised by how sophisticated some of the games were: there were mechanisms with competing personal and group objectives and scope for bluffing (and even cheating).

After the workshops I did an analysis of the games to see which mechanics were used and what assumptions about reality hid behind the games. This contributed to answering questions such as:

This was the first time I’d used game design this way, and I’m really excited about the results. For me, the strength of the method is that it poses deep and important questions in an implicit (and non-threatening) way. It gets at the knowledge we all have floating around in our heads which we don’t usually give voice to, and does so without putting us on the spot.

If you’re interested in doing this kind of workshop for your own research, I’d be really interested to hear about it! You can also read more here.

This was carried out as part of the project “Increasing resilience to water-related risk in the UK fresh fruit and vegetable system” in collaboration with Bruce Lankford (UEA, UK), Tim Hess (Cranfield University, UK), George Garbutt (Oxford University, UK), and Kate Pringle, Jon McCosh and Mlungisi Shabalala (Institute of Natural Resources, South Africa). The project is funded through the Global Food Security’s Resilience of the UK Food System Programme with support from BBSRC, ESRC, NERC and Scottish Government, and one of the workshops was supported by Worldwide Fruit Ltd. Photos by Jacques van der Burgh.